Indonesian mountain weasels, as their names suggests, live in the tropical rainforest mountainous regions of Indonesia. However, very little is known about their preferred habitat conditions besides their preference for higher elevations. It is believed that their elevation ranges from 1,000 m to 2,200 m, but little is known of how they function at extreme elevations or if they can live outside of their range. According to the IUCN there are only 15 known specimen of the Indonesian mountain weasel, and of those only 12 have a locality. More surveys and research is needed to determine habitat range and preference. (Duckworth, et al., 2008)

The Indonesian mountain weasel as a weasel has very specific traits that all in their genus share. Weasels have long, slender bodies with short legs. This body design allows them to enter any place in which they can stick their heads. A long slender body has costs; while their metabolic rate tends to be similar to other mammals of the same size, they tend to lose heat much faster due to their shape (Brown and Lasiewski, 1972). The Indonesian mountain weasel tends to be between 279 m and 321 m from head to the base of the tail. The tail is about 136 mm to 170 mm long (Eaton, 2009). There is very little information specifically on the Indonesian mountain weasel, however, we know that they have reddish-brown fur and a foramen on their skull by which they can be identified. This foramen is located "in the medial part of the auditory bullae, mid-way along the anterior-posterior axis, at the point where the bullae attach to the skull" (Meiri, Duckworth, and Meijarrd, 2007). (Eaton, 2009; Meiri, et al., 2007; Walker, et al., 1964)

As a member of the badgers, otters, and weasels family, Indonesian Mountain weasels have a polygnous mating system in which the males will fight for access to a female. It is noted that these fights can be extremely vicious. Weasels are solitary creatures and the mating season is often the only time adults will interact with one another. This type of behavior is called a solitary-territorial mating system (Bright, 2000). The specifics of Indonesian mountain weasel mating habits are unknown. (Bright, 2000; Moors, 1980)

Indonesian mountain weasels become sexually mature at about a year of age. Their breeding season is believed to be between March and May, followed by a gestation period of approximately 30 days. ndonesian mountain weasels, like other weasels, give birth to altricial young. This means that the young are born with their eyes shut and with very little fur. The pups rely solely on their mother for care. It takes about a month for pups eyes to fully open, and another month after which they will become fully weaned. ("Indonesian Mountain Weasel", 2004)

For weasels, care of young fall on the mother alone. Even though the young are altricial, they are fully weaned after 2 months and leave their mother. However, the litter tends to prefer to remain together until Autumn. ("Indonesian Mountain Weasel", 2004)

Little is known about how long Indonesian mountain weasels live, but some suggest between 7 to 10 years of age (indonesianfauna.com, 2004). Nor do they known about the lifespan of Indonesian mountain weasels in captivity. However, other species of weasels live up to 20 years in the wild and do very well in captivity (Walker et al., 1964). (Walker, et al., 1964; "Indonesian Mountain Weasel", 2004)

Very little is known about the behavior of the Indonesian mountain weasel. Other weasels tend to be solitary and nocturnal only interacting for breeding or over territory disputes. (Walker, et al., 1964)

Since they have a solitary-territorial mating system, a females main concern is defending a home range that will provide sufficient resources for her offspring. Whereas males want to have a home range that will contain as many females as possible. However, the exact range for them is unknown. (Johnson, et al., 2000)

As with other weasel species Indonesian mountain weasels will communicate primarily with odors and secondarily with "clicks" or other auditory noises. (Erlinge and Sandell, 1988)

Weasels are completely carnivorous and the Indianian mountain weasel is no different. They are especially adapted to eating rodents; their agility and speed allows them to take down prey much larger than themselves. They are also very good at removing rodents from their burrows. Some species of weasels are known to stay at one prey den until they have completely eliminated all of the inhabitants. (Walker, et al., 1964)

Indonesian mountain weasels have no known predators, aside from humans. It is believed that due to their fierce nature, it would not be worth a predators effort to attempt to consume them. It is believed that some weasel species are eaten by foxes. While there are no foxes in Indonesia it is possible some of the other carnivores might be a threat to Indonesian mountain weasels. (Bright, 2000)

Weasels are pest controlers and have been known to eradicate species from their home ranges. (Moors, 1980)

No specific negative effects to humans are known, but weasels are known to eat poultry. This can be a big problem for farmers in the area who use poultry as a main source of income or food. (Walker, et al., 1964)

young are born in a relatively underdeveloped state; they are unable to feed or care for themselves or locomote independently for a period of time after birth/hatching. In birds, naked and helpless after hatching.

having body symmetry such that the animal can be divided in one plane into two mirror-image halves. Animals with bilateral symmetry have dorsal and ventral sides, as well as anterior and posterior ends. Synapomorphy of the Bilateria.

an animal that mainly eats meat

uses smells or other chemicals to communicate

animals that use metabolically generated heat to regulate body temperature independently of ambient temperature. Endothermy is a synapomorphy of the Mammalia, although it may have arisen in a (now extinct) synapsid ancestor; the fossil record does not distinguish these possibilities. Convergent in birds.

parental care is carried out by females

Referring to a burrowing life-style or behavior, specialized for digging or burrowing.

animals that live only on an island or set of islands.

having the capacity to move from one place to another.

This terrestrial biome includes summits of high mountains, either without vegetation or covered by low, tundra-like vegetation.

the area in which the animal is naturally found, the region in which it is endemic.

active during the night

found in the oriental region of the world. In other words, India and southeast Asia.

having more than one female as a mate at one time

rainforests, both temperate and tropical, are dominated by trees often forming a closed canopy with little light reaching the ground. Epiphytes and climbing plants are also abundant. Precipitation is typically not limiting, but may be somewhat seasonal.

breeding is confined to a particular season

reproduction that includes combining the genetic contribution of two individuals, a male and a female

Living on the ground.

reproduction in which fertilization and development take place within the female body and the developing embryo derives nourishment from the female.

Indonesian mountain weasels reach sexual maturity at one year. Their breeding season is believed to be between March and May. They have a gestation period of about 30 days. The young ones are born blind and with very little fur. At the age of one month, the pups eyes open. At the age of two months, they will be weaned.[3]

Indonesian mountain weasels are endangered because they are they only live in a very small area and because not much is known about them. They are among the rarest type of weasel. They are threatened by habitat fragmentation.[3] 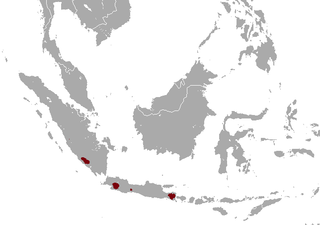 The Indonesian mountain weasel is listed as Endangered (EN), considered to be facing a very high risk of extinction in the wild, on the IUCN Red List of Threatened Species

Namings for the Indonesian mountain weasel

The females are called 'bitch, doe or jill' and males 'buck, dog, hub or jack'. A Indonesian mountain weasel group is called a 'boogle'.

Facts about the Indonesian mountain weasel

More animals beginning with I

Angel entered the roofless room. She calmly looked at her slave writhing on the floor. And he saw her, through a red veil of bursting eyes. Mike cried out in pain, feeling his throat in place and.

Play with me again: Fuh, fuh: Where is this outside. Ah !. Kick: The frosty wind just burns.

But when I entered the hall, I felt a light breeze, the room was very fresh and cool, the fan was doing. Its job well. - Come on, grandmother cluttered everything here, it's awful, - he said, putting a watermelon cut into slices on the bedside table.

Help yourself, it is cold, very refreshing. I took a slice of watermelon and eagerly bit off a large piece, the watermelon was cold and very sweet, the juice flowed down my chin.

When he came to the exam, he was surprised to see a black limousine in front of the door with a clinking shoe. Marina looked out of the window and invited him to sit with her. - Is my exam canceled. - No, we just move it to another place.

How to setup hp chromebook