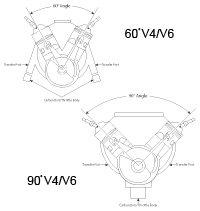 One of the most daunting tasks a young outboard technician encounters is sorting out all of the different models throughout the years. Because many outboards are only used a few times each summer, they may last for 30 years or more. Twenty year old technicians may find themselves working on outboard motors that are ten years older than they are! A timeline of the changes and improvements to a manufacturer's product line can put everything into perspective for a technician. This increased knowledge can have a tremendous effect on a technician's self-confidence.

The history of the Johnson/Evinrude V4 product line is very complex but can be greatly simplified
if looked at from a point of engine design changes and the year of these changes. They can be broken down into four distinct generations.

Prior to 1958 all Johnson/Evinrude engines were either a one or two-cylinder. In 1958 the V4 was introduced.

The first V4 was rated at 50 horsepower and the basic engine design was manufactured from 1958-1968 reaching a pinnacle of 85 horsepower in 1968. This engine is most commonly identified by its single 2-barrel downdraft carburetor.

In 1964 a second V4, with minor changes, was introduced. It was manufactured from 1964-1968. This engine utilized a single inline four barrel side draft carburetor to make 90 horsepower. For
the 1966 model year this was the first Johnson/Evinrude outboard to produce 100 horsepower.

All 1958-1968 models have exhaust gases that exit through the cavitation plate (through-the-prop exhaust wasn't available on the V4 engines until 1969).

Other notable design changes for 1958-1968 V4 engines:
-1961 First year for battery ignition (magnetos would continue on some models until 1967).
-1967 First year for breakerless ignition, 100 hp only.
-1968 First year for mounting the distributor under the flywheel (no more belt driven distributors).

In 1969 the Johnson/Evinrude V4 engines were completely redesigned from top to bottom. Since 1985 (when the V4 loopcharged engines were introduced) these outboards have been commonly called the "crossflow" V4 engines. Although manufactured from 1969-1997 they received no significant design changes after 1984.

There are three very distinguishing characteristics that separate them from the 1958-1968 engines:

The first and most obvious is the modern, sharp edged, triangular engine cover that emphasizes the low profile of the 90 degree crossflow V4 engine (a contrast to Mercury's tall inline six cylinder).

The second is the new one piece gearcase with through-the-prop exhaust and rubber hub propellor (no more shear pins for the V4).

The third is the two side-draft 2-barrel carburetors. None of the crossflow V4 engines were ever equipped with fuel injection, only carburetors.

From 1985-1994 these outboards were commonly called the V4 "loopcharged" engines. When
the compact "60 degree" V4 engine was introduced in 1995 the 1985-1994 engines were called
the "90 degree" V4 loopcharged engines. Although manufactured from 1985-1998 they received
no significant design changes after 1995. The 90 degree V4 loopcharged engines have come in different horsepower ratings between the 120 hp (smallest) and 140 hp (largest).

The introduction of the loopcharged V4 in 1985 brought the Johnson/Evinrude "V" engines into the modern age of two-stroke engine technology.

A loopcharged two-stroke has three transfer ports, one in the back (similar to a crossflow), and one on each side of the cylinder. The three transfer ports direct the air/fuel mixture to the spark plug and away from the exhaust port without the need for a piston deflector. This is accomplished by casting the cylinders with very precise contours in the transfer ports. The addition of two extra transfer ports in a loopcharged engine also feeds larger quantities of the air/fuel mixture to the combustion chamber. This provides a dramatic increase in power over a crossflow engine.

When a marine technician encounters a 1958-1968 V4 outboard, common sense and a basic understanding of a points style (magneto or battery) ignition will get them through the ignition system. Mechanical aptitude will get a technician through the relatively simple fuel system. The gearcases on these models are very easy to rebuild (as long as you remember to feed the wires through before pulling the magnets out of the electric shift gear case).

Perhaps the most common outboard ever manufactured is the 1969-1997 V4 crossflow Johnson/Evinrude engine. In production for 29 years these are as basic as an outboard gets. Having the correct service manuals and a basic understanding of breakerless ignitions and fuel systems will get a technician through just about any problem. One special tool is needed to rebuild the gearcase: a pinion height measuring tool. This tool can be used on all 1969 and newer V4 and V6 outboard gearcases and 1978-newer OMC and Cobra Sterndrive gearcases. Definitely a tool to invest in!

The 1985-1998 Loopcharged 90 degree V4 Johnson/Evinrude outboards are also very common and are serviced almost as easily as the earlier V4 crossflow engines. As with the crossflow engines, a service manual and a basic knowledge of breakerless ignitions and fuel systems will get a technician through most tasks. Rebuilding the mechanical shift gearcase is relatively simple with a pinion height measuring tool.

Service on the 1995-newer 60 degree V4 is a little more complicated. Having the correct service manual and some specific Johnson/Evinrude tools is almost a requirement. These engines
came with carburetors or DFI (Direct Fuel Injection) and attending a factory service school is
almost a necessity for diagnosing the ignition system or fuel system. The gearcase is a traditional mechanical shift design and rebuilding it is relatively simple with a pinion height measuring tool.

This is a v4 115hp Johnson Outboard motor with a 25" extra long shaft . This motor has very low hours and has strong compression of around 120psi on all 4 cylinders. This 115hp v4 Johnson pumps water great, shifts into gear, has power tilt and trim and is a 4 cylinder 2-stroke. This is the perfect horsepower for almost any boater. This 115hp Johnson outboard runs excellent and is in great shape. We have fully boat tested this motor.This is a carbureted 60 degree powerhead. This engine will work great on an, open fisherman, cruiser, offshore boat, bay boat, flats boat, deck boat. or any other vessle that can handle a 25" shaft. Parts are very easy to find and inexpensive since these are some of the most popular motors around.

Click the diagram where you think your part is located

I lifted her to her feet, stroked her cheek and began to recover, watching how Sveta puts herself in order. She turned away, putting her clothes in order, froze. I hugged from behind, kissed the neck, inhaling the scent of my hair. She sighed.

Then Katka got up and went to the bathroom to take something and lubricate her hole. I could not bear it and went to her bathroom and began. To lubricate her treasure myself. She arched and rested against the bathroom, and I got into it with great difficulty. At first it was painful for her, but by moving rhythmically I began to bring her buzz.

Katya nodded silently. Polina continued to run, hoping that she would have time to convey the main part. Of course, all the panties were dirty, she felt it, but she wanted to go to the toilet very much.

The train of my thoughts was interrupted by a bell in the hallway. All the girls jumped up - this is the first visitor. One could hear the doorman at the entrance receiving the first guests. I stopped near the sofa and remained standing, although my knees were shaking with excitement.

Save as adobe pdf missing

Fit modeling jobs near me