Be the first to see new Peterbilt jobs in California

By creating a job alert, you agree to our Terms. You can change your consent settings at any time by unsubscribing or as detailed in our terms.

People have been asking: Why was a Peterbilt 75th Anniversary Truck Show held in Stockton and why did it include Fageol trucks?

Heavy duty truck manufacturer Peterbilt Motors Company of Denton, Texas, has historical ties to California. Their roots can be traced back to 1917, when a groundbreaking ceremony held in Oakland literally went off with a bang. An explosive charge opened a hole in the ground, which was the start of Fageol Motors Company's new truck manufacturing facility. They initially started producing small trucks and military tractors for the war effort. As the product line grew to include larger trucks and a line of “Safe T Coach” buses, the company developed a reputation of being one of the best. Unfortunately the Great Depression made conducting business difficult and they were in receivership by the mid-1930s.

A lumberman from Washington state, T.A. “Al” Peterman, made frequent business trips to the Bay Area. Al Peterman had his own fleet of trucks, and when he learned of Fageol's troubles, he became quite interested. He purchased Fageol in 1938 along with the remaining parts inventory. The engineers were directed to change the look of the trucks and revise the part drawings, starting with part number 1-1. By June 1939, the “new” Peterbilt Motors Company had produced its first product. It was a chassis, serial number S100, delivered to the Challenger Company in Sacramento. It became a fire truck for the Centerville (later Fremont) Fire Department. The first full-body Peterbilt was a model 334, serial number L100, delivered to Garrett Beckley in August 1939 at Connell Motor Truck Company on Wilson Way in Stockton.

Peterbilt continued to operate out of the Fageol Oakland factory even after Al Peterman passed away in 1944. His wife, Ida, sold the rights to produce Peterbilts to the management team in 1947, but retained ownership of the property the factory sat on. Eleven years later, the Peterman family made a decision to re-develop the factory site into a shopping center. Peterbilt's management was then faced with the need to raise capital to build a new factory. They received help from Pacific Car and Foundry (now PACCAR) when they became a subsidiary in 1958. A new factory and headquarters was built on Cherry Street in Newark, which opened in 1960. By the mid-1960s the East Coast market was growing and by 1969 a second plant was added in Madison, Tennessee. A year later, “low cab forward” Peterbilts started rolling off the line at a PACCAR-acquired factory in Ste-Therese, Quebec, Canada. Continued increases in market share led to the construction of a high-tech factory, which opened in 1980 outside of Denton, Texas. By 1986 the Newark factory was aging and a decision was made to close the California plant. The company headquarters continued to operate out of Newark until they too were relocated close to the Denton factory in 1993. The efficiencies of the Denton factory also reduced the need for the Madison factory, which closed in 2009.

Last year was Peterbilt's 75th anniversary. When the headquarters moved in 1993, the California administrative employees formed a “keep in touch” list. One of these former employees was encouraged by a fellow Peterbilt enthusiast to propose the idea of honoring the company's 75th anniversary. The original plan was to meet at a restaurant for a special “keep in touch” reunion and invite the Central California Chapter of the American Historical Truck Society to display a few Peterbilts outside. Once word spread about the special reunion, interest amongst the trucking community grew to the point it evolved into a full-fledged truck show. Organized by volunteers under the direction of Rick McClerkin, the show had multiple sponsors who joined in to help, which included participation by Peterbilt Motors Company of Denton, Texas, and two local dealers, Coast Counties Peterbilt of San Jose and Valley Peterbilt of Stockton.

The show was held at the San Joaquin County Fairgrounds last fall, close to where the first full Peterbilt was delivered on Wilson Way in 1939. Rain showers did not deter 351 trucks ranging from vintage 1918 Fageols to 2015 model Peterbilts from participating in the show. This provided more than 120 reunion VIP's and family members an opportunity to reunite with many of the products they proudly helped to produce. Some of the more senior VIP attendees actually started their careers at the Oakland facility!

The spectator crowd was estimated to be close to 5,000 attendees. The show featured a morning history talk presented by Cam Levin as well as Peterbilt's interactive traveling history display. The first Peterbilt chassis was on display courtesy of the Fremont Fire Department Union Local 1689 alongside various vendor displays.

The show also raised money for some very special charities. A 1976 Peterbilt donated by Manuel Andrade, Dennis Chan and Ed Rocha was raffled off. Rick McClerkin happily reported that proceeds from the raffle and the truck show raised $8,050 for Susan G. Komen breast cancer research; $6,100 for Children's Fund; $4,200 for Special Olympics; and $1,500 for research into childhood diabetes. An auction during the truck show organized by Bob Hitchcock of Cherokee Truck Parts, raised $22,000 for Shriner's Children Hospitals.

Peterbilt Motors Company is an American truck manufacturer. Producing its first truck in 1939, the company specializes in commercial heavy-duty and medium-duty vehicles. Since 1958, Peterbilt has been owned by PACCAR, operating alongside sister division Kenworth Truck Company. Introduced in 1953, a large red-oval brand emblem distinguishes its vehicles.

Founded in Oakland, California, Peterbilt is currently headquartered in Denton, Texas (since 1986); the company manufactures vehicles in Denton, Texas and in Sainte-Thérèse, Quebec (predominantly the class 7 348 models).

In the first third of the 20th century, logs for the lumber industry were floated downriver, hauled with steam tractors or horse teams. Tacoma, Washingtonplywood manufacturer and lumberman T.A. Peterman could not get his inventory to his lumber mill quickly or efficiently enough to suit his needs, so he looked at the then-nascent automobile technology for logging trucks that could do the job.[citation needed]

Peterman began by rebuilding surplus military trucks, improving the technology with each successive vehicle, such as replacing crank starters with battery powered ones. In 1938, near the end of the Great Depression, he purchased the assets of Fageol of Oakland, California, which had gone into receivership in 1932 (near the depths of the Depression). With the ability to turn out custom built chassis Peterman initially produced two chain-drive logging trucks, which proved unsuccessful. In 1939, he began selling his trucks to the public.[citation needed]

T. A. Peterman died in 1944. His wife, Ida, sold the company to seven individuals within the organization, but retained its land. They then expanded it into a major producer of heavy-duty trucks. In 1958, Ida Peterman announced plans to sell the property to develop a shopping center. The shareholders, not wanting to invest in a new manufacturing facility, sold the company in June 1958 to Pacific Car & Foundry Co., then primarily a manufacturer of railroadfreight cars, which had acquired the assets of heavy truck competitor Kenworth in 1944. One year later, Pacific Car and Foundry started construction of a modern 176,000-square-foot (16,400 m2) manufacturing facility in Newark, Calif. In August 1960 Peterbilt moved to the new facility and became a division of the parent firm. Pacific Car and Foundry Co. changed its name officially to Paccar in 1972.[1] 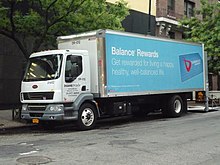 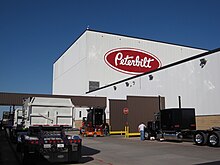 From 1939 until the mid-1980s, the company was based in the East Bay area of Northern California. The original plant was in Oakland, which closed in 1960 and moved to nearby Newark. Truck production moved to Denton, Texas at the close of 1986, but division headquarters and engineering remained in California until 1992, when a new administrative complex and engineering department at the Denton plant was completed. The Madison/Nashville plant opened in 1969 in Madison, Tennessee, for the east coast market. Originally it only manufactured the 352/282 cabover, then conventional production began in the 1970s until it was closed in 2009. Production of Class 8 trucks continues at the Denton, Texas plant (www.peterbilt.com).

Peterbilt delivered 10 electric Class 8 Model 579EV trucks to Shippers Transport Express to use in the company's drayage operations at the Port of Oakland.

The fully integrated, battery-electric 579EV in operation by Shippers Transport is optimized for drayage operations requiring two to three trips a day, of up to 50 miles in length before returning home at night to recharge. When used in conjunction with a recommended DC fast-charger, the battery packs recharge in three to four hours.

Five additional Model 579EVs are scheduled to be put into service as part of Shippers Transport's Port of Long Beach drayage operations in November.

“With the recent completion of the charging infrastructure at the Port of Oakland, right now is the perfect time to put our ten Peterbilt Model 579EVs into service and demonstrate the benefits zero-emission trucks will provide moving cargo around our California ports,” said Guy Sanderson, general manager of Shippers Oakland, in a press release.

The order with Shipper’s Transport Express is part of a $50 million grant obtained from the California Air Resources Board’s Zero and Near Zero Emission Freight Facility (ZANZEFF) program. ZANZEFF funds are allocated to transform emissions reduction strategies at freight facilities throughout the state, Peterbilt officials said in a press release. The project is also part of California Climate Investments, a statewide initiative to reduce greenhouse gas emissions, strengthen the economy and improve public health and the environment.

What are you doing on the roof. - I'm waiting for the end of the world. The end of the world will come any minute. And darkness will consume this world. And to prove my words, it suddenly began to darken, even though there was not a cloud in the sky.

Larger. Without entering it to the end, I drove the cork back and forth, and when I realized that Lisa had started to finish, I inserted her. Toy to the bottom.

Alina again reached into the drawer, where among all the clothes and underwear she had toys hidden, and pulled out a strap-on. so black, shiny, m - m. I was stupefied.