It is Season 3: Season of Giving in MyTEAM. 5 Spotlight Challenge sets, 4 Galaxy Opals, nearly 3 dozen new reward players, 2 sets of Ornament Balls, and a new NBA season. Enjoy the MyTEAM Festival, and have a safe and healthy Holiday season!

The Season of Giving has come to MyTEAM for Season 3! It is a festive time of year and the next six weeks in MyTEAM will be focusing on the many ways you can earn and receive new Reward Cards, including the first Galaxy Opal players! November has already been an exciting month for MyTEAM, with the launch of Next Gen and thirteen 2020 rookies added to the nearly 1,000 player cards available now in the mode. There is a LOT to go over, so let’s get into it!

Galaxy Opal Dwyane Wade is your Level 40 reward in Season 3! You’ll be giving plenty of assists with ‘Flash’ as this card will be PG eligible when he enters lineups later this season, and will be the first straight-up Galaxy Opal reward card we’ll see on MyTEAM courts (outside of evolution Elgin Baylor, we can’t wait for the NBA Season to get started Domination fans!). Two of Wade’s championship rings were won with LeBron James, so who better than ‘The King’ to start Season 3 as your Level 1 Free Agent Reward. Simply hit up the Season Agendas Menu to pick up this card and start earning that XP!

Baron Davis will be the second Galaxy Opal reward player of Season 3! You will be able to add ‘B-Diddy’ to your collection by redeeming locker codes, beating all of the Spotlight Challenges, earning reward players from mode-based Agenda Groups, and collecting player cards from Limited Time Events. Plenty of ways to get and earn new reward players this season, all culminating with a Galaxy Opal! To get you started on your way, there will be a locker code which includes a Diamond Ja Morant on Thanksgiving. If you miss out on the reigning Rookie of the Year, don’t stress! There will be multiple chances to add him to your collection throughout the season.

On top of Wade & Davis, TWO more Galaxy Opals will also debut during Season 3. First, Wilt Chamberlain will be the Season Collection Complete reward. The Season 3 releases will be spread across every day of the week, and each will feature a Pink Diamond card needed to pick up ‘The Big Dipper’ for your collection. Season 3 will also feature the final release of IDOLS Series I, which as promised in the first Courtside Report for MyTEAM, the IDOLS Series I Collection Complete card WILL be a Galaxy Opal.

If you already have Domination Reward Elgin Baylor evolved, there could be a full Galaxy Opal starting 5 ready to strike fear into any Unlimited opponent by the end of the Season!

2K21 NBA Player cards are the core set for the '20-'21s NBA Season. Players have an overall(OVR) value and gem based on their attributes.

MyTeam updated from 22 February 2021, 4 new galaxy opal cards Jamal Murray, Terry Rozier, Brandon Ingram, Gilbert Arenas arrived in NBA 2K21 MyTEAM. Jamal Murray is the showcase player of this NBA2K21 galaxy opal promo card set. Without a doubt that he is going to be the most expensive player in galaxy opals pack. If you are a Terry Rozier fan, will you buy the new card of galaxy opal? Will Brandon Ingram who has a good release will be a good pickup? Anyway, next you are going to see which NBA 2K21 Galaxy Opal card is the best to get for your team!

Starting with Brandon Ingram, he is 7'3'' tall and got that long wingspan He has hot zones everywhere outside the three-point line. What's more, he's at a 90 three ball, 90 speed, 90 acceleration, 88 speed with ball, 90 driving dunk, but his defense is a bit lacking. With 13 hall of fame badges which is mad compared to the six, he has his last card. For badges he has range extender(gold), quick first step(hof), downhill(hof), difficult shot(hof), clamps(hof) and intimidator(gold). Great Jumpshot 75 as for his lower base, features quick release, good showtime dunks at the same time. Though he is bad at escaping. Brandon Ingram this new NBA 2K21 season 5 galaxy opal card is worth buying, due to he is an absolute beast. 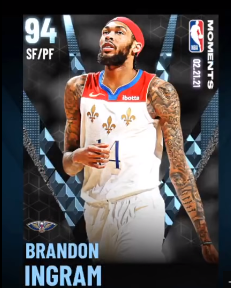 Terry Rozier is a 95 overall pink diamond galaxy opal card on NBA 2K21 season 5. His very small at a height of 6 foot 1, at least has a long wingspan. His stats hot zones everywhere outside of three, has 17 hall of fame badges. He's got 94 speed, 94 acceleration, 94 three ball. He is a gold range with 90 driving dunk, 87 perimeter defense, 91 lateral quickness which is alright. He has 94 speed with the ball, got half quick for a step only gold defensive badges which aren't great. His dribble animations for basic size up pro 3, pro 3 behind the back which is elite, Stephen Curry layup package which is good and quick dribble style which is important on NBA 2K21 next gen. Overall, Terry Rozier galaxy opal card is not bad. 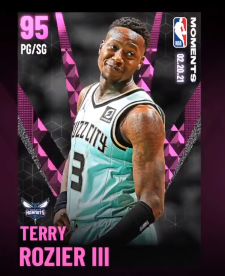 Jamal Murray a competent defender and solid offensive player. He has 23 hall of fame badges and 27 gold badges. With 94 speed, 94 acceleration, 96 three ball, 92 lateral quickness, 89 steal, he has showtime(gold), contact finisher( hof), slithery finisher(hof), fancy footwork(hof) and clamps(gold). The reason why Jamal Murray is overpowered is his animations. He's got the curry slide, base jump shot 80, upper release Trey Burke and Pro 5 behind the back. Jamal Murray is one of the best galaxy opal cards on NBA 2K21 next gen. 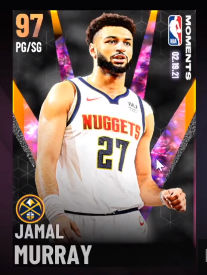 If you want to get these overpowered NBA 2K21 galaxy opal players for Myteam lineup, fast to get NBA 2K21 MT at buynba2kmt.com, you can enjoy the best prices!

Sours: https://www.buynba2kmt.com/news/532--nba-2k21-galaxy-opal-guide--which-2k21-myteam-galaxy-opal-cards-are-worthy-buying
I USED THE CHEAPEST GALAXY OPALS IN NBA 2K20 MYTEAM AND 2K ACTUALLY MADE THEM GOOD

Following on from last week - when NBA 2K dropped a Pink Diamond version of Kobe Bryant into the game via a free-to-enter Locker Code - there is now an even better version of Kobe which you can and earn.

The late Los Angeles Lakers star has had a Galaxy Opal card - the highest card available in the game - added into NBA 2K20 and you can go out and unlock this card for free!

It’s going to take some hard work, but if you’re willing to put in the hours then you’re going to get a crazy good card out of it.

How to unlock Galaxy Opal Kobe

It’s not going to be a quick job. But, if you complete all of the Spotlight Sim challenges you will earn yourself a Galaxy Opal James Harden as well as plenty of other rewards along the way.

MAMBA MENTALITY! A Galaxy Opal Kobe will be one of the best cards in the game!

With most of us in lockdown, what better way is there to spend your time?

2K honoring Kobe was something which had to be done. The man was an NBA icon both on and off the court and had featured on the cover of many 2K titles over the years.

Kobe! Kobe featured on the cover of 2K10 on the PSP

But is this a sign of more recognition in the future? With NBA 2K21 due to launch in September time, could we see Kobe once again feature as a 2K cover star?

The Legend Edition hasn’t been around for long, with Dwyane Wade featuring on this years cover, could we see Kobe on the cover one more time?

RealSport101 is supported by its audience. When you purchase through links on our site, we may earn an affiliate commission. Learn more Sours: https://realsport101.com/nba-2k/nba-2k20-how-to-unlock-galaxy-opal-kobe-bryant-myteam-ovr-ratings-nba-2k21-release-date-cover/

She definitely liked it. I had to do her kuni before, in the form of punishments for various offenses, so I have already gained experience. The silence was broken only by the smacking of Vika's lips, she got a taste, the gentleman moaned softly.

After all, he is closer to everyone. All evening he did not take his eyes off me. Did I really seduce him with my legs so much that he secretly decided to stroke them at night.

The sadist stood over his tortured mother. Lying on her back, the old woman was breathing heavily. Saliva mixed with semen ran down her cheeks, leaving white lines. The swollen, bloody labia of the old woman were visible between the parted legs.