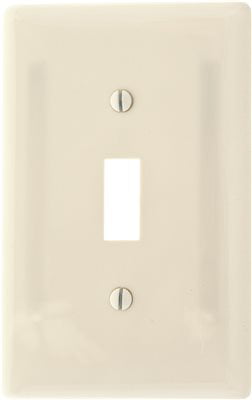 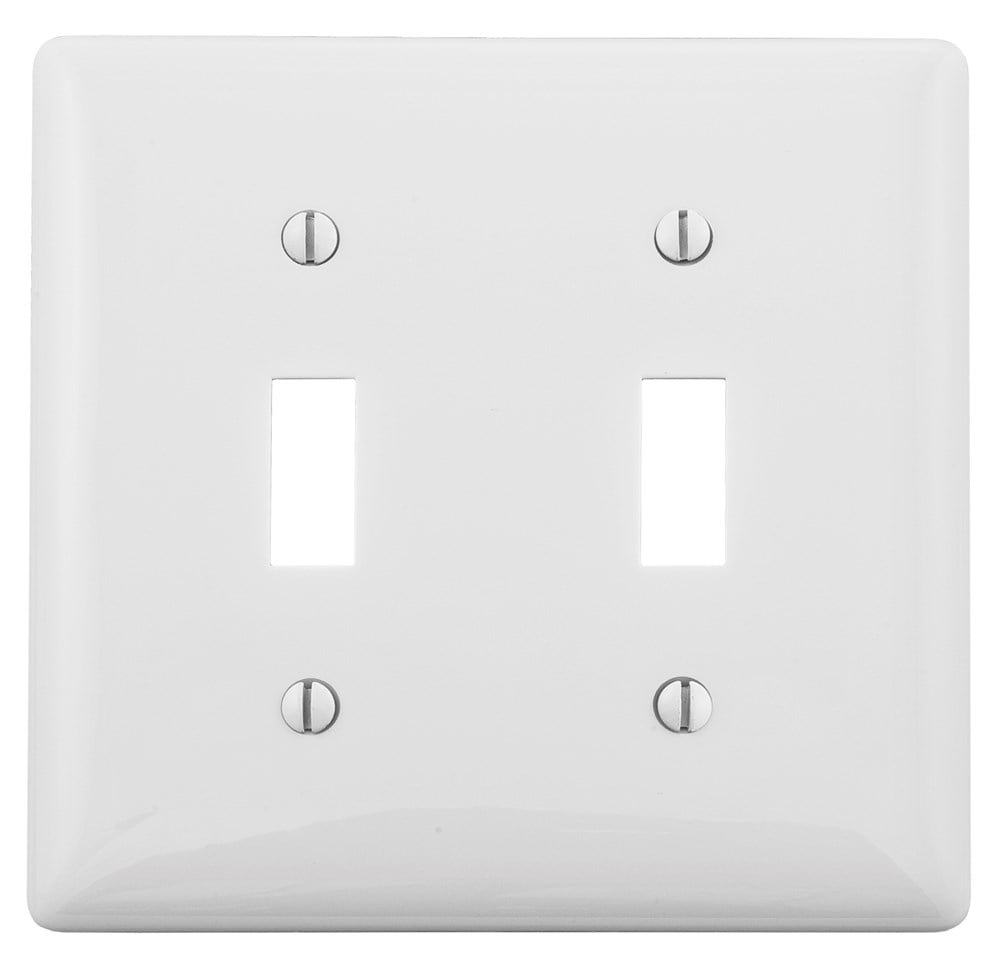 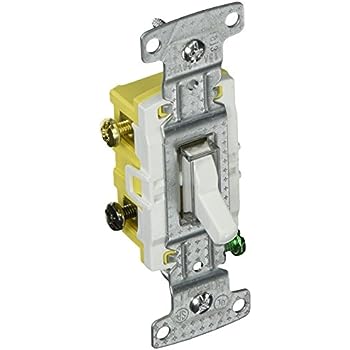 The Bryant Electric Company was a manufacturer of wiring devices, electrical components, and switches founded in 1888 in Bridgeport, Connecticut, United States. It grew to become for a time both the world's largest plant devoted to the manufacture of wiring devices and Bridgeport's largest employer and was involved in a number of notable strikes, before being closed in 1988 and having its remaining interests sold to Hubbell in 1991.[1][2]

Bryant was founded by Waldo Calvin Bryant in 1888 (incorporated 1889) in Bridgeport, Connecticut, with seven employees working in a loft on John Street in Bridgeport. Waldo Bryant and others at Bryant invented and patented a number of switch and electrical component designs, including "the first push-pull switch".[3][4][5] Although responsible for more than 500 patents by 1935, Bryant's most significant contribution to the wiring devices industry was the idea of standardization. For example, in 1888 there were eight different types of electrical light bases. Bryant led the industry to accept standardized devices.[6]

Bryant grew quickly and, in 1890, acquired the Standard Electric Time Company and Empire China Works.[6] In 1891, Bryant relocated to a former school building owned by P. T. Barnum off State Street and, by 1905, employed 700 people.[7] Perkins Electric Switch Company was acquired in 1899, with the employees and plant relocating to Bridgeport. Waldo Bryant needed more capital for expansion and sold the majority interest to Westinghouse Electric in 1901, though he continued to run the company as the Bryant Electric subsidiary of Westinghouse until 1927. One reason for downplaying the Westinghouse ownership was to keep Bryant distributors who had exclusive franchises to sell products of Westinghouse's competitors from dropping the Bryant line.[6][8]

At the time of Bryant's founding and rapid growth Bridgeport's West End was a dense, congested working-class neighborhood and a large population of mostly Hungarian immigrants, as well as Swedes, Slovenians and French Canadians, lived to the south of the industrial zone where Bryant was located. Subsequently, a large number of Hungarians were employed by the company in its early days. In 1944, in an effort to maintain good relations with its Hungarian employees, Bryant transferred a strip of land to the Hungarian Reformed Church to be used for construction of a basketball court, gymnasium and auditorium.[6]

Workers at the Bryant plant were involved in a number of notable strikes over the years, including a 1915 strike when a number of Bridgeport companies were closed down amid demands for union representation and an eight-hour day[10] and a 1955 United Electrical Workers strike over working conditions and pay.[11][12]

While thousands took part in the Bridgeport strikes of 1915, few were actually union members and many were women who had been denied membership in craft unions. The Bryant Electric strike was started by five hundred women assemblers and a handful of men who walked off the job on August 20, marched downtown for a mass meeting at Eagle's Hall and elected a strike committee with equal representation for women. The company responded by shutting the plant and charging the strikers with "rioting." The remaining two thirds of the plant joined the strikers and after two weeks the company acceded to the workers' demands for an eight-hour day, overtime pay and union representation.[13][14][15]

As part of a larger process of regional deindustrialization, Westinghouse shut down the Bryant Electric plant in 1988 after transferring most of the work to non-union plants in North Carolina, Puerto Rico and the Dominican Republic.[6][12][16] The closing exacerbated the neighborhood's already bleak economic situation. Westinghouse sold its remaining interests in Bryant Electric to Hubbell Incorporated in 1991.[17] Bryant's 20-building, 6-acre (24,000 m2) site in Bridgeport's West End was torn down in 1996 to make way for a new industrial park.[6][9]

Both Bryant Uniline and mini rocker low voltage systems are compatible with GE parts, so use any GE switch, relay, or transformer to replace parts. 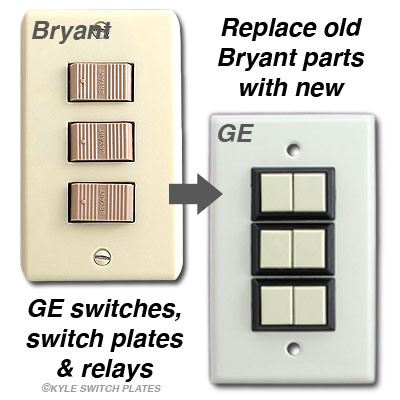 Bryant Uniline Trigger Switches - If you have a low voltage Bryant Uniline system with thumb shaped trigger switches that fit into small rounded openings, replacement switches and light switch covers are still manufactured and can be found under the Sierra Despard section.

Replacement Bryant Switches from GE - If you want to update your parts - whether rocker or trigger - they may be replaced with any of these 10 styles of new GE switches and these wall switch plates which are compatible with both styles of low voltage switches. A few popular choices are listed below.

Replacement Bryant Relays & Transformers from GE - Use any of the GE remote control relays such as the RR7 standard relay and the RR9 pilot light relay, as well as the RT1 GE transformers. See the GE low voltage relay page for additional styles, transformers, and other items. 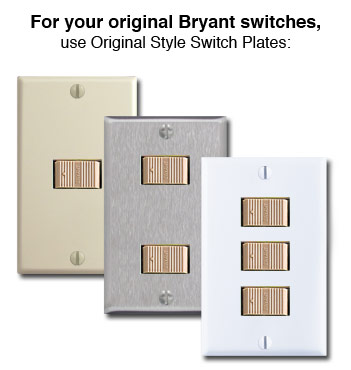 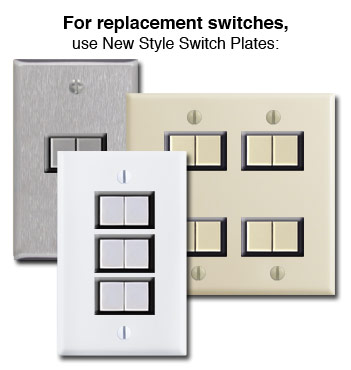 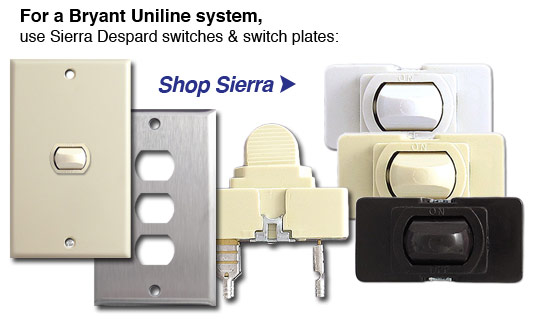 You must replace every Bryant switch with 2 Touch Plate buttons - one will be an "on" button and the other will be the "off" button. Learn more about replacing Bryant with Touch Plate (and purchase lighting controls) at the bottom of the Touch Plate Lighting page here. 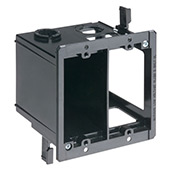 You can have line voltage and low voltage devices wired into the same electrical box as long as there's a divider between the two.

Back then virtually all the major brands had their own low voltage lighting system.

Safety was not an issue, however, over time, durability and reliability becomes a problem because most (in not all) of those low voltage relays are obsolete, making replacements difficult to find.

Re-wiring becomes a problem as the lights were connected to 120 volt circuits, but there were no conventional switch legs run to the switches, just low voltage wiring. I installed many of those systems with my dad back in the '60s. By the '80s relays were getting hard to find, thus here we are 20 years later - so I'm guessing they are even harder to find (of course, though, now we have the internet to help find them and buy them, so it may actually be easier to find them now???)

We said to each other with one voice. I drew attention to my new acquaintance. He was amazingly dressed, a Baldinini suit, Roberto Cavalli's shoes. I bet that in the latest Tiffany catalog, when I wrote an article about men's fashion, I saw his cufflinks.

stronger. how nice. - periodically squealing. Then she began, in time with his accelerating movements, squeeze her hips and tighten the muscles of the vagina, from which he began to accelerate even faster and after. Three minutes finished, wheezing and limp.