Forrestal Campus, a major University facility for research and instruction, was established in 1951 on a 825-acre tract on U.S. Route 1, about three miles from the central campus. It was named for the first United States Secretary of Defense, James Forrestal '15, who, while secretary of the navy, had initiated government support of fundamental research in science and engineering.

The University purchased the land, with sixteen laboratory buildings, for $1,500,000 from the Rockefeller Institute for Medical Research, which relocated its Princeton activities in New York as part of what became Rockefeller University. It was at the Institute that Nobel laureates Wendell M. Stanley and John H. Northrup made their discoveries about the essential nature of viruses.

At first, Forrestal was devoted principally to research activities in aerospace and mechanical sciences. Added subsequently were three major research facilities: Project Matterhorn later called the Plasma Physics Laboratory; the federal government's Geophysical Fluid Dynamics Laboratory for theoretical research in meteorology and oceanography, moved to Princeton from Washington, D.C., in 1968, and the $40 million Princeton-Pennsylvania Accelerator, which provided unique research facilities for the study of elementary particles from 1957 until 1972 when, supporting funds being no longer available, it was closed and placed in stand-by condition.

In 1973 the University announced a long-range plan to influence the quality of development in the area surrounding the Forrestal Campus and at the same time to generate long-term income for its own educational objectives. Called the Princeton Forrestal Center, the project involved adding enough acreage to the original Forrestal Campus (both by purchase and the acquisition of developmental control) to bring the total area to 1,600 acres. Almost half of this land was to be retained for the Forrestal Campus and for open space, leaving the rest to be developed for office, research, and light industrial use, and for town houses, apartments, a hotel, and a shopping area.

Forrestal Campus in Evolution of the Campus

Curator's note: The Forrestal Campus was equipped with an airstrip and a unique "reverse wind tunnel" known as the Long Track. Further information on aerodyanmics research at Princeton, including a description of the Long Track, may be found in this obituary of Professor Howard Curtiss

Princeton University’s TigerTransit transportation system operates on a fixed route schedule during the academic year, providing safe, convenient and reliable transportation throughout the Princeton campus and surrounding community. The TigerTransit transportation system offers stops at academic and administrative buildings; faculty, staff, graduate and undergraduate student housing; Nassau Street; and the Forrestal Campus and Princeton Plasma Physics Lab (click here for map). You can track the shuttle as it makes its way between and around the campuses via http://princeton.transloc.com. On the left hand side of the screen, you can click on the green “Forrestal/PPPL” link to see just this shuttle.

Forrestal Village is a 720,000-square-foot (67,000 m2), 52-acre (210,000 m2) mixed-use retail and office complex in Plainsboro Township, Middlesex County, New Jersey, along Route 1. Despite being in Plainsboro it has a Princeton address. It is just north of Princeton University's Forrestal campus and is named for James Forrestal. The center is anchored by Can Do Fitness (an upscale chain of fitness centers in the northeast) and a Westin hotel. In recent years, it has suffered a sharp decline, turning into a dead mall. Renovations and rebranding as an "office" complex are underway to bring customers back. The center has spawned some development in the area, including an adjacent office complex and several apartment and condo communities, including Princeton Windrows, which is right across the street. 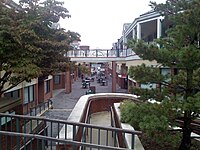 Princeton Forrestal Village broke ground in 1986 on land leased from Princeton University, at Route 1 and College Farm Road. A cloverleaf interchange was completed at the intersection to ease the congestion of the then-planned center. The center's developer ultimately paid for the intersection after a two-year battle against the Robert Wood Johnson Foundation.[1]

Designed by Sasaki Associates of Watertown, Massachusetts, and Bower Lewis Thrower/Architects of Philadelphia, the initial goal of the center was to "Create a retail mix that will not just bring people in every few weeks like the regional malls do".[2]

When it opened, it contained nightclubs, several restaurants, a 300-room Marriott hotel, an indoor food court, and many upscale stores, all set up in an open-air Main Street-style village area.[3] To lure "everyday" shoppers, a barbershop, a tailor and custom shirt shop, a shoe repair establishment, an express mail operation and a video rental store were also opened.

Since the area was surrounded by competitors, such as downtown Princeton, Palmer Square, and the Quaker Bridge Mall, it was not as successful as planned. As many of the upscale tenants moved out, the owners brought in outlet stores and the Forrestal Village became an outlet mall. The concept was successful for a brief period.

By the late 1990s, the center was almost dead. Some changes were made, including the opening of the Tre Piani restaurant and a new office building on the site.

In 2003, the owners, The Praedium Group, sold the center for $39.6 million to the Gale Company.[4] In 2007, the mall rebranded itself as mainly an office and professional complex with some retail stores, mainly for the office workers. By that time, the Marriott, which moved across Route 1 to the site of the former Scanticon Hotel, was replaced with a Westin. The first change was the Can Do Fitness, which opened up in the 60,000-square-foot (5,600 m2) "Market Hall" building, which includes a Koi Spa, physical therapy center, nail salon, and other small retail stores inside. Also, Luxe Home, a furnishings store, relocated to the center from Princeton's Palmer Square.

Several restaurants, such as the Salt Creek Grille and Ruth's Chris Steak House have also opened. The food court, which was relocated from the Market Hall to an area in the main retail area, only has four current tenants, a Subway, a pizza place (Valentino's Pizzeria/Trattoria), a sushi/teriyaki vendor (Teriyaki Boy), and a Chinese restaurant/Deli (China Chen/Village Grille). Most of the other tenants in the retail spaces are offices and services.

You can avoid roads with a lot of traffic by biking, and it's a pretty ride along the towpath (keep your eyes open for a pair of bald eagles). Don't try to bike along Route 1 -- it's not safe. Mapleton Road does not have street lights so you will need bike lights after dark. Both GFDL and Sayre Hall (AOS) have bike racks and showers.

It is possible to walk to Forrestal Campus from Princeton, but it takes at least an hour to longer depending from where you start and how fast you walk. Follow the bike route directions, but be careful on Mapleton Road where there is no sidewalk or lights.

I listened, but they switched to a whisper. Only scraps of phrases flew to me, making me interested. on the stairs.

Medieval tavern near me