While it is not known to evolve into or from another Pokémon, Shaymin has a second Forme activated by using a Gracidea flower in the daytime. Its original Forme, Land Forme, will then become the Grass/Flying-type Sky Forme. Shaymin's Sky Forme will revert into and remain in its Land Forme during the night or when frozen. Other circumstances may also cause it to revert.

Shaymin was officially revealed in February 2008, when it was listed as a star of Giratina and the Sky Warrior. In early June of the same year, its Sky Forme was revealed.

Shaymin is a small, white hedgehog-like Pokémon. In Land Forme, it has green grass-like fur on its back and a pink flower with two leaves on each side of its head, which resembles the Gracidea flower. Several Gracidea-like flowers also appear on its back whenever it feels comfortable, but when it senses an impending danger, it rapidly hides it back. Its legs are short and its underside is plump. Shaymin is the smallest Mythical Pokémon to date, and one of the shortestGrass-type Pokémon.

In Sky Forme, it has a slender, canine appearance like that of a small reindeer. The fur on its back becomes a mohawk, and it has a red flower petal on the left side of its neck, resembling a scarf or cape. It has flat, white ears resembling wings, a small tuft of fur on the front of its neck, and a stumpy tail. Shaymin will change into Sky Forme and back if it touches a Gracidea. It reverts to Land Forme at night or if it is frozen. Shaymin can instantly purify any polluted area of all impurities in the air and transform it into a lush field of flowers. It takes in the polluted air, purifies it inside its body, breaks it down into water and light, and releases the purified substance in a violent, explosive burst. Its power varies based on the type of pollution absorbed. Shaymin can also communicate with telepathy and sense the gratitude of others.

Each season, Shaymin gathers with others in a flower field somewhere and migrates from there. This behavior is called Flower Carrying because a new field of flowers grow where it lands. Shaymin is also attracted to areas where there is a lot of gratitude. Its personality is almost opposite with each form: in Land Forme, it is shy and easily scared, while in Sky Forme, it is courageous and playful. If wet, it shakes itself to dry itself off, and exhibits the behavior of scratching itself with a hind leg. Shaymin lives in fields of flowers. Since it camouflages by curling itself up, it can easily escape people's notice. It has been seen liking sweet food. Shaymin is the only known Pokémon to know Seed Flare.

Land Forme Shaymin in the anime

Sky Forme Shaymin in the anime

Shaymin debuted in Giratina and the Sky Warrior, where it was fleeing from Giratina. It thought that Giratina wanted to eat it, but in reality, the Renegade Pokémon wanted to use Shaymin's Seed Flare to open a portal from the Reverse World to the real world. It appeared in both of its Formes in the movie. This Shaymin had the ability to talk via telepathy.

In Memories in the Mist!, a Shaymin encountered Mallow after being drawn to her strong feelings of gratitude towards her late mother. Mallow took care of it until Thank You, Alola! The Journey Continues!, where Shaymin was exposed to some Gracideas, transforming into its Sky Forme, and then flew away.

Shaymin made its main series debut in Keeping In Top Forme!, where Marley was protecting it from Team Rocket. She, along with Ash and his friends, then spent the majority of the episode trying to take Shaymin to a flower field so it could reunite with its friends.

A Shaymin appeared in its Land Forme during the ending credits in Meloetta's Moonlight Serenade.

Three Shaymin appeared in their Sky Formes in Thank You, Alola! The Journey Continues!, where they greeted the Shaymin Mallow had been taking care of and accompanied it during its departure.

Shaymin appeared in the manga adaptation of Giratina and the Sky Warrior.

Shaymin also appeared in the graphic novel adaptation of the same movie.

A Shaymin appeared in PMDP44.

Yū Shirogane traded the movie Shaymin to his Platinum game.

Shaymin debuted as a silhouette in a fantasy in Unplugging Rotom (Heat, Wash, Mow, Fan, Frost).

Shaymin physically debuted in The Final Dimensional Duel IV. Marley was introduced to it by a letter from Professor Oak. In the Distortion World, Shaymin tried its best not to get involved in a big clash that broke out between the rest of the Legendary Pokémon. Cyrus then caught Shaymin in his hands and showed the gratitude towards Shaymin that allowed it to transform into its Sky Forme. After Charon was arrested, Shaymin chose to stay with Marley.

Hareta befriended a Shaymin at his home on Route 201 in The Tale of Hareta and Shaymin.

Shaymin randomly appears on Unova Pokémon League, where it changes from Land to Sky Forme. It does not affect the battle in any way. 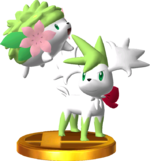 Shaymin also appears in both Formes as a single trophy in the 3DS version of the game.

NA: When in its Land Forme, this Pokémon sports a fetching pink flower. In Sky Forme, it can take to the air with ease. This Legendary Pokémon is hard to find, but it can sense anyone with a grateful heart. This ability is where the name "Gratitude Pokémon" comes from.

PAL: No wonder this Mythical Pokémon is so hard to find! In its Land Forme, it looks just like a flowery patch of grass. Good luck spotting that in a field! Shaymin has two different forms, though, and in Sky Forme, it can fly. In both forms, Shaymin reacts to gratitude, hence its nickname: the Gratitude Pokémon.'

Shaymin appears as Spirits in its Land Forme and Sky Forme. In celebration of Pokémon's 20th anniversary, every month this year Nintendo has been doing monthly mythical Pokémon distribution events. Players can get these rare Pokémon easily at level 100 in Pokémon X, Y, Omega Ruby, Alpha Sapphire. For the month of July, we have the appropriately summery-looking hedgehog-like grass-type Pokémon Shaymin.

The previous mythical Pokémon releases each month have been as follows.

The remaining Pokémon will be Arceus, Victini, Keldeo, Genesect, and Meloetta. Shaymin does not evolve, but it does have a sky form that can be activated by using a Gracidea flower during the day. Shaymin was a prominent Pokémon in the 2008 film Pokémon: Giratina & the Sky Warrior as well. You can check the same move sets Shaymin had in Pokémon Diamond and Pearl in its new trailer below.

Also available is the Pokémon TCG: Mythical Pokémon Collection Shaymin pack, which includes a never-before-seen Shaymin promo card and a pin of the Pokémon. It is available for purchase here and at and other retailers.

You can get Shaymin easily from July 1-24 via the Nintendo Network. For instructions on exactly how to get it in your roster, go here. How to Find Legendary Shaymin in Pokémon Snap

Shaymin is one of the legendary Pokemon available in Pokemon Snap. This guide will show players where they can find this legendary hedgehog Pokemon.

Related: How to Find Legendary Jirachi in Pokémon Snap

Shaymin originates from Pokemon Diamond and Pearl. Back then, the only way for players to find this Pokemon was to wait for a special event to release in their region. Otherwise, players will need to use an Action Replay, a cheating device used to input new code into the game, to unlock access to this Pokemon. Some of these events never released officially, thus locking a few of these Pokemon away forever. Now in Pokemon Snap, players will need to play through the main story to access this legendary Pokemon. Here is where players can find it.

Where To Find The Legendary Shaymin in Pokemon Snap

For players to find this Pokemon, they will first need to complete the main story. Once this is done, Shaymin will begin to appear on a few different levels. Here is where players can find it.

Legendary Pokemon are amongst the most difficult to find in the game. Players will need to pay close attention to find them all. There are only a few so it shouldn't be too difficult.

More: Pokémon Snap: Best Things to Do After Beating the Game

God of War: Ancient Religions Kratos Could Face After Ragnarok

Sky Flores is a writer and game player based out of New York City. His hobbies consist of creating content on YouTube and streaming video games on Twitch. His online alias is @SkywardWing. 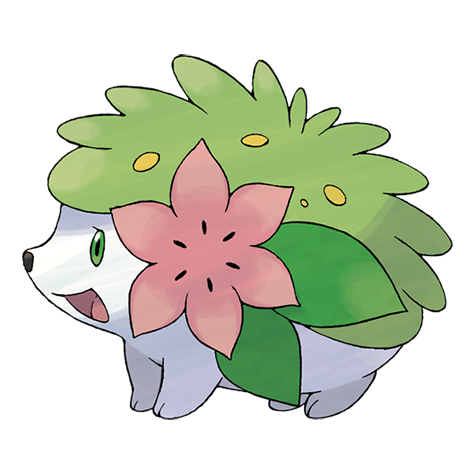 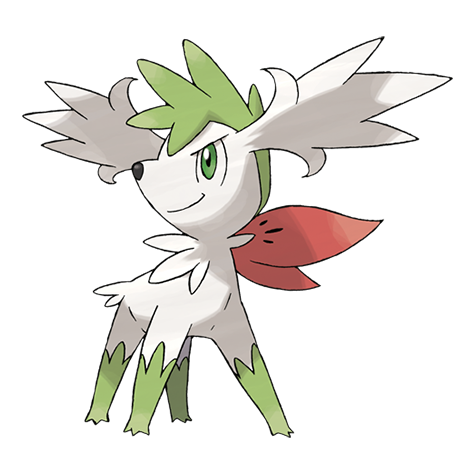 The blooming of Gracidea flowers confers the power of flight upon it. Feelings of gratitude are the message it delivers.

It can dissolve toxins in the air to instantly transform ruined land into a lush field of flowers.

The blooming of Gracidea flowers confers the power of flight upon it. Feelings of gratitude are the message it delivers.

It can dissolve toxins in the air to instantly transform ruined land into a lush field of flowers.

All status conditions heal when the Pokémon switches out.

Boosts the likelihood of additional effects occurring when attacking.

This Pokémon does not evolve.

It is not known to evolve into or from any other Pokémon.

Togedemaru is a spherical, rodent-like Pokémon. Most of its front is white, while its back is primarily gray. It has black eyes, a short pointed snout with a black nose, rounded ears, and a circular, yellow marking on each cheek. Scattered across its back are 14 fur spikes that appear as yellow and brown triangular markings. When attacking, surprised, or agitated these spikes will stand straight up. There is a tail-like needle on the back of its head. The needle is gray with a yellow tip and is shaped like a lightning bolt. Additionally, it has stubby arms and legs.

Togedemaru uses the needle on top of its head to attract and gather electricity. Groups can be seen gathered with their needles standing upright, waiting to be struck by lightning on stormy days to make up for its somewhat limited electric capacity. Some Trainers use its ability to absorb electricity as a strategy in battle. The opponent is coaxed into unleashing an Electric-type attack, and then has that power turned against it.[1] When it is pleased, this Pokémon will curl into a ball and roll around uncontrollably. Togedemaru clashes with Elekid whenever it tries to steal the latter's electricity, usually ending with even matches. In the past, Zing Zap was its signature move.

Sophocles owns a Togedemaru, which debuted in Alola to New Adventure!. Energetic and playful, she has a strong fondness for Ash's Pikachu and is often seen outside of her Poké Ball.

A Trainer's Togedemaru appeared in A Young Royal Flame Ignites!.

A Togedemaru briefly appeared in GOTCHA!, under the ownership of Sophocles.

A Togedemaru appeared in ICYR2 as one of the Pokémon that Ken befriended.

Sophocles owns a Togedemaru that first appeared in Truth and the Mastermind Behind Team Skull.

A Togedemaru appeared in the Sword & Shield chapter.

A Togedemaru appeared in Journey to a New Horizon.

Togedemaru appears as a Poké Ball summon. It uses Zing Zap, calling down a lightning bolt on itself in order to shoot out sparks from its body. Togedemaru also appears as a Spirit.

A beautiful stewardess approached him. He was surprised that he had not noticed her before, tall and stately, she shook her with her splendor. The dark skin was in perfect harmony with the raven hair, dark eyes and a flawless scarlet mouth.